Practicing for a downwinder

Downwinders in a perfect world would be played out with the ocean swell pushing you along aided by wind but as I said that is in a perfect world.   The reality is often more like having to deal with cross chop, side on winds, currents and often fatigue, so how do we prepare for this awesome side of our sport.

Taking it one step at a time

You have to build up to an epic downwinder where swells are 3 times your height, the wind is howling and you are flying along at 15 knots on full plane so let’s see what we can do before that.

Starting out you might need to consider going out on windless days where the swell is still pumping.  Paddle out for a few miles directly into the swell direction. Now simply turn round and paddling back in.   The aim of this sort of exercise is two fold.   You are getting used to being offshore and you are handling swell.

Try going out in conditions similar to the above where the winds aren’t much above 10 knots.  This is enough to speed up your journey, but it won’t affect the sea state too much.  The main difference here is that you will find yourself a little more unstable due to moving top-water, but it is so important to feel comfortable in these conditions.

Being able to cope with paddling along chop and waves of about 2-3ft is super important.   Quite often we encounter waves that come in from the side and opposing directions to the true swell.  They may be steep or just rolling but either way you will find yourself having new control issues for the board and your own balance.  Short wave lengths also cause board control issues so if the water is looking tricky persevere, this is how you become a better open ocean paddler.

I watch people paddle around all day long in their square secure stance and never move.   If you did this at sea you would soon find yourself being bumped, underpowered and getting pretty fatigued.   What I suggest is that even when on flat water you practice switching stance into surf positions and then paddling on all sides, especially those that feel less than natural.  Better you learn to feel comfortable about it on the flat than try it for the first time at sea.

Obviously this article isn’t written to train you in the art of open ocean paddling so you need to consider your own abilities but if you are feeling happy at each stage you’re progress will that much easier.

In addition I would say without doubt that paddling with others who are more capable in those conditions will massively help your own abilities and confidence as well as keeping you safer.

The picture below shows a great environment for training with friends.  The water state is enough to create movement with the wind blown swell and make you work to improve balance and board control. 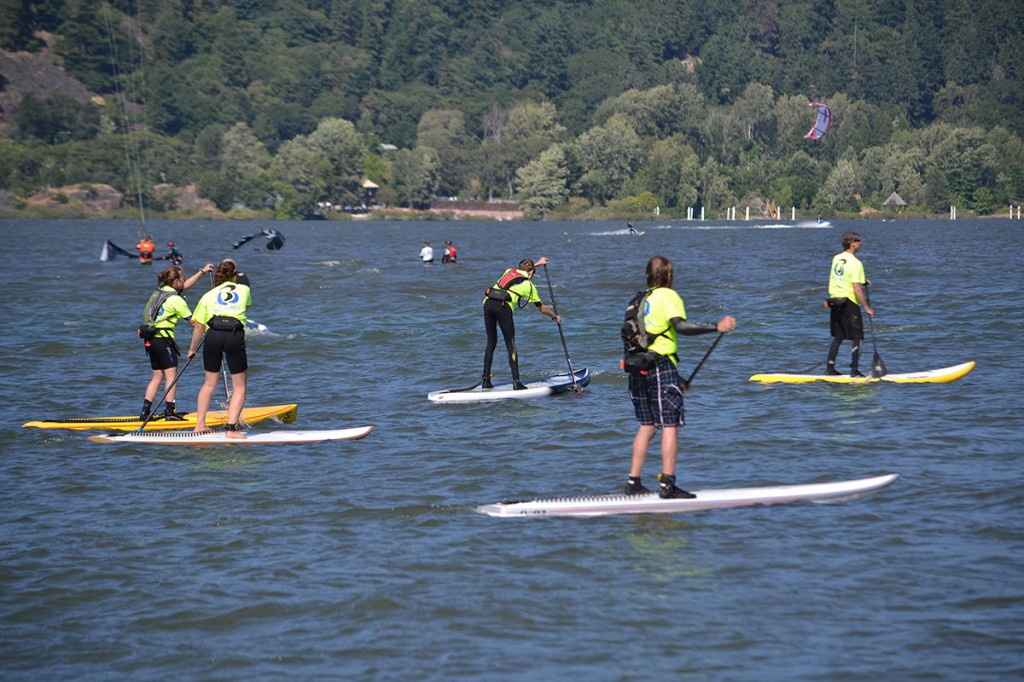 What is so different about downwinders from just paddling around

Distance – the distance you are going to be paddling could possibly be a lot further than you have done before.  With the wind on your tail is is very easy to travel 10 miles without even realising it.

Fatigue – because of the distances being travelled you are going to be working harder. Many of you will be pretty fit but have you ever tried maintaining a surf stance for longer distances.  Your thighs can start to burn and you can cramp up quite easily.  Rough water also takes a lot more balance and that in turn uses more energy.

Skills – you certainly don’t need to be a surfing god but it helps if you can move around a board, shifting weight and foot positions to trim the board, steer it and maintain balance in choppier waters.  When you head out into open water the sea state can change very quickly even when the weather looks fine.   My home turf of Hayling Island on the south coast can get pretty rough even on a nice day due to tides, currents, and wind chop.  Then add that to the many sand banks and we can go from 1ft to 4ft in just a few hundred yards.

What kit do you need

Having the right kit in any sport can massively increase your enjoyment and progression.   The biggest thing to recognise in downwind paddling is you are aiming to travel a longer distance at greater speed than normal so the board is going either help or hinder you. What we are looking for here is a board that has certain characteristics:

What are the risks

If we had to risk assess a downwind paddle I would say:

What should you consider to be safe

Being seen is absolutely critical when out on open water.  Conditions such as visibility can change with fog banks coming in even on a sunny day so you need to have some way of being spotted.  Carrying high-vis tabbards is certainly one way of making yourself more visible.  The nice thing about a tabbard is you could also tie it to your paddle handle and wave it up high if you found yourself having to sit on the board.  Others would have more chance of seeing this especially if you were in a bigger swell.

Making others aware of your proposed journey and the route.   Without  doubt, any long paddle should be well planned.   You need to know that you can stop off in case of problems and that those on land that are aware of your route know how to get to you if necessary.

Planning a time duration for launch to landing so other know when to start worrying why you aren’t back yet. Speaks for itself really.   If we launched at lunchtime and were only intending to be out for 2 hours why are still not back by 6pm.    In that time you could have been drifting out to sea and the rescue services could have picked you up already.

VHF radios are a must as we venture further afield.   We particularly like the Nautilus Lifeline SUP / Kayak and Canoe VHF GPS radio.  Simple to use is the key with this unit.

Energy gel, bananas, water etc are all necessary. You will be using lots of energy and need to keep hydrated out there.

For your own benefit, make sure you have your own inhaler etc if necessary or other medicines just in case.   This is down to you to know how you work.  Don’t rely on other to understand your medical needs.

Is it safe to go alone

Absolutely not!   Anyone considering doing an open water paddle alone is putting themselves at unecessary risk and risking the lives of those that may be called out to help you.    Safety devices/radios/gps are all good if you can activate them but useless if you are knocked out.