So what is the Tabou Manta

2017 has seen the Tabou Manta go through a lengthy development cycle, with endless prototypes and fine tuning. The development team included Ross Williams, World Champion Slalom sailor and the rest of the brands PWA crew.

The main aim was to suck even more top end control out of the board, along with improved accelaration and gybing control. A key feature has been to buck the trend of scooping out the deck to lower the mast base, which leaves the Manta’s deck totally flat, with a small domed rail to get your feet round. The deckpads are really thin and this brings the rider right down into the board giving you even more feel, but we wonder just how much this really makes a difference?

Ultimately the Manta is aggressive and totally up there with race winning features and abilities, but there’s a hint of freeride smooth in there as well so you’re not going to get bucked off at every possible chance.

If we look at the multi level cutout in the tail you’ll see just how complex it looks, but when you mix that with the inner set footstrap positions it brings back the rider control and feel over the narrowed area. The underside carries a flat nose to double which finally blends to a vee in the tail. 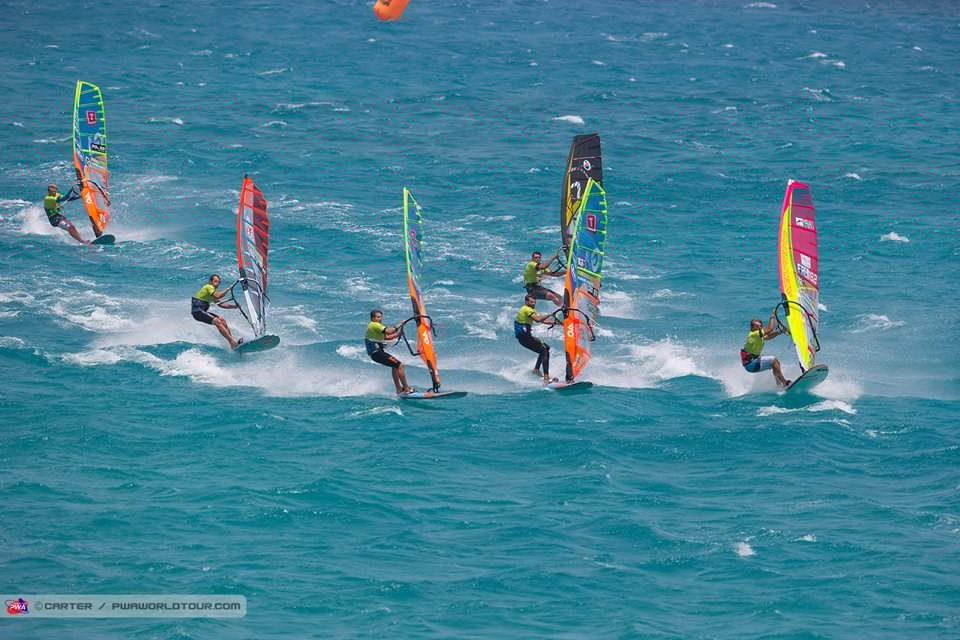 How does it stack up in terms of performance?

The Tabou Manta has always been fast, but it was a bit of a best to handle and get teh most from it.
The ongoing development by the whole team at Tabou boards has really turned this around for 2017 and the boards have come of age. They’re still all ut race machines, but as with formula one race cars, they been analysed and tuned to within an inch of their lives to give the riders the edge.

You definitely get that lively feeling and drive off the fin is insane, but the board doesn’t explode away from you in an uncontrolable way leaving you airborn. Rough water handling is vastly improved and the board really holds itself down, driving through heavier water, whilst maintaining a more planted feel.

For those of you that enjoy Freeride and Freerace boards like the Rocket you’ll know that manageable feel that you’re given which tearing along in all sorts of conditions and I’d say that the Manta has now integrated that into its DNA.

When you take note of the thinned out nose you get some idea of how the board will handle with a more balanced feel coming from the added volume in the tail that also helps to improve accelaration and gybing.

By placing the deckplate forward we found a definite PLACE, that got the board sitting flat for maximum speed. The thick domed rails in the tail are really comfortable and afford you plenty of control when driving against the fin.
For gybe fans this board has really upped its game in delivering a more controlled and adjustable arc during the turn so split second adjustments and now on the button.

The Tabou Manta has really matured and it still a race beast. If you are after a more sedate version for some freeride and race then please check ou the Tabou Rocket.