Paolo Marconi paddles around the Island of Elba

On the 6th April 2013, Paolo Marconi, Quickblade and Jimmy Lewis Europe team rider circumnavigated Elba Island.   Covering a distance of 52 miles in 12 hours and 37 minutes his epic paddle started at 5a.m in the relative calm before facing the true teeth surrounding the waters of Elba Island.

The first part of the run a Jimmy Lewis Maliko M-14 and a QuickBlade elite race AC100sq/in. 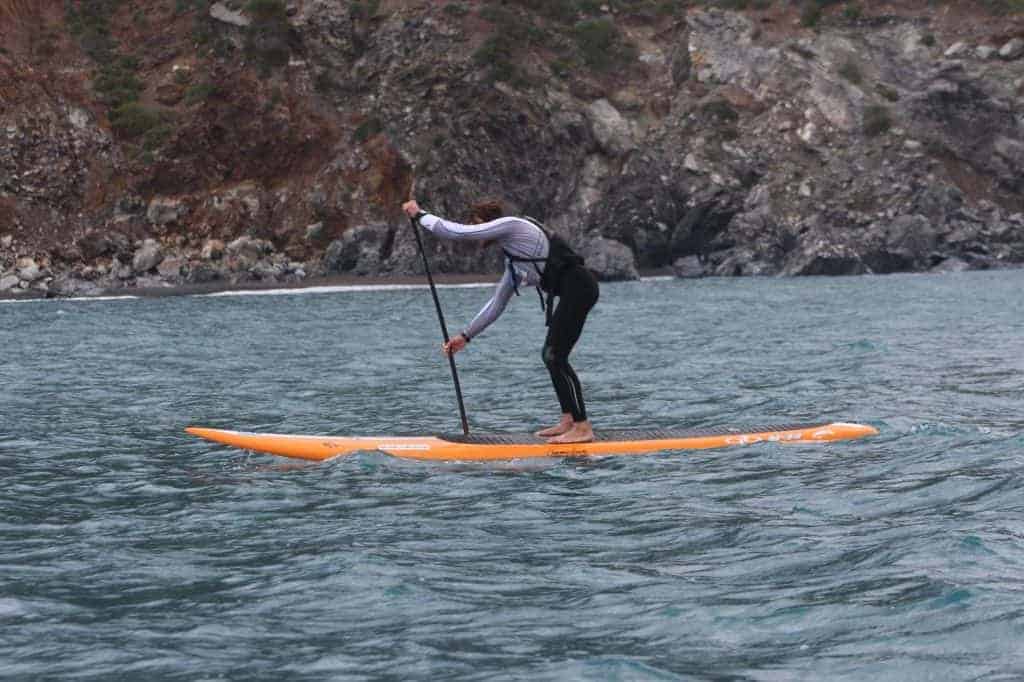 The first 4 miles was a real slog with sidewinds and cross chop but that was soon left behind as he pushed on from Punta Ripalti to Punta Fetovaia which become an outright 18 mile downwinder with full on open ocean swells and 20 knots of wind.

A short distance of about 3 miles in almost complete absence of wind due to the island geography involved Paolo in a board change. His new choice was Stiletto 12’6 the new race shaped by Jimmy in 2013 easy to control and manoeuvrable of 14’0 for a strong UpWind on the opposite side of the island, against more than 15 knots of wind for about 12 miles from Capo San Andrea to Enfola promontory. That seemed endless and it proved hard for Paolo’s nervous system. Exactly in the worst moment his training and preparation helped him and after a small crisis due to cramps that resumed his strength, his power and his goal, he eventually won because he didn’t give up.

New board choice fits the rider perfectly, allowing him to manage the hard moment because inevitably fatigue begins to be felt, but best helped by a different paddle QuickBlade elite race AC90sq/in smaller and shorter of the previous of about 2.2 inches, most appropriate in strong UpWind case. Just for short period of times the wind became lighter, losing its power over and forcing Paul suddenly to a bigger challenge, keeping him from having the right path that leads through off Portoferraio until the top North East of the island, Capo Vita. We heard Paolo repeatedly screaming that Capo Vita never came, because of the side current that forced Paolo to paddle only on the left side for over 8 miles. In that moment, character and professionalism of the athlete, which had prepared for this mad test.

At this point, after more than 47 miles Paolo double the Capo Vita, but it seemed as two small hills…and he felt just for a moment that the occasion was lost. All team members forced him not to quit and after a few miles more at Capo Pero, when the athlete was able to see Rio Marina in front of him, even with a breeze of southeast wind forcing him to run the last stretch upwind, he went forward until the end.

Paolo never stopped and riding his Jimmy Lewis Stiletto 12’6, he completed the run almost two hours shorter than the road map laid down by his personal coach Doctor Gianluca Caimmi, arriving at 17:37p.m to Rio Marina, greeted by sound of harbor sirens and acclaimed by many friends and spectators that arrived for the occasion

Paolo with his eyes shining, absolutely excited and thanking all the people got the strong embrace from the crowd and after a while he flied off at the hotel.

We would like to thank Portoferraio coast Guard and the Common of Rio Marina for their hospitality.

Finally, a special thanks to Paolo Marconi for giving us an example of great value and for writing human history for the sport of stand up paddling.