Well, what can I say other than wow.   This run was very unexpected and very exciting with some big shoulder high bumps pushing us along.

Trevor had called me the night before to say we had a NE f5 wind on Sunday morning and it might be a good run to go from Pagham to Selsey.  The tide was low at 6am so we could launch at 8ish and have a fun ride home.

If you look at the map you can see the layout of the place and how the  wind direction fits to the land and route taken. 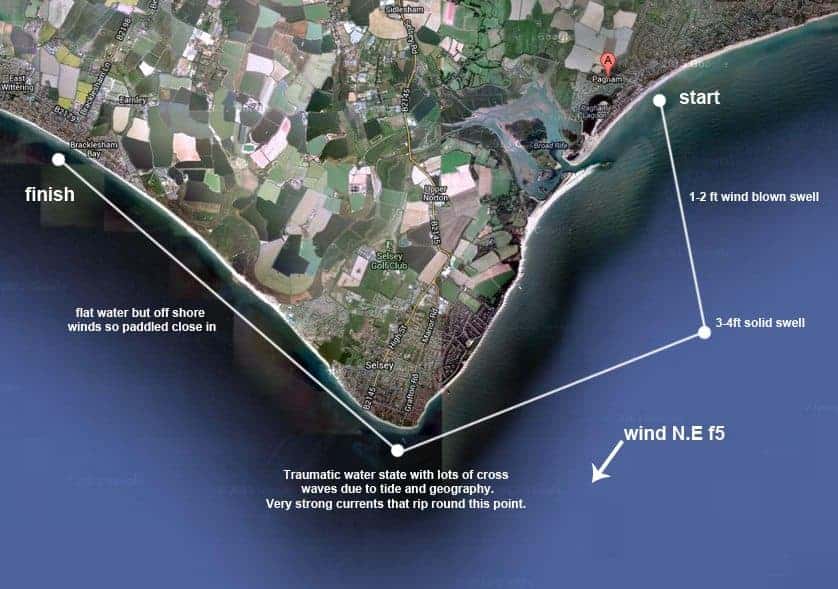 I met Trevor at Bracklesham car park at 7 to plan our route and vehicles.    From the pebbled beach the water was super smooth because of the strong offshore wind, but what you need to bear in mind is that the beach is pretty steep and if you keep in close to the beach you cut out a lot of wind.

We decided to leave the car at Bracklesham so we loaded both boards, paddles, wetsuits and water onto the other car before heading round to Pagham to pick our launch spot.

By car it is only a ten minute drive to get round and parking is free at Pagham, on a dirt track just behind the arcade.You can then kit up and launch straight out behind Pagham yacht club.

Launching here meant we had a fairly sheltered location so was able to get the brains in gear before hitting the big stuff further out and I needed it.   I am definitely a night person so for me it is pretty hard to get focussed so early.

With the wind and waves at slight angles close in it was clear we needed to paddle out to sea first to get some proper runners otherwise we would keep heading in too close to shore. It always amazes me how much the sea state changes in just a short distance when you are in open water.   From the shore you just can’t appreciate what is going on out there and this is why we need to support our Coastguards and Foreshore agency staff.

We headed out into the open water and finally found runners that we could see were heading for the lifeboat station at Selsey Bill.   At first the runners were pretty mild and you would grab the occasional one, but then suddenly we were surrounded by shoulder high lumps that were breaking and these bad boys were giving us some amazing rides that allowed us to jump from wave to wave.

The speed picked up pretty quickly out here and the rides got longer and steeper letting me jump way back and really ride my Jimmy Lewis M14 from the tail which you don’t get in small stuff.

I even had the pleasure of the sun poking out to say hi which made me think I was in somewhere warm but then I fell in so that bubble was burst.

It took me a good 20 minutes before I was totally dialled into the board.   I think the fact it was early really held me back on this occasion.

Anyway we are now beginning to reach the end of the Bill so I began to surf into shore in case I overshot the land and head out to sea.  That would be embarassing.

As you come close in at Selsey you see houses along the coastline.   This is where I would say you should really be taking care.  The currents here are evil and the water becomes a real cauldron.  You have water rushing in a direction that it simply shouldn’t be going considering the tide turned over an hour ago and this is due to the shear land mass blocking all that water.   Get the state of tide wrong here and you might not make it round so be very aware of the conditions.

We paddled in very close to shore and finally ran out of waves. The water was flat but that wind was now trying to blow us out to sea so it was a case of digging in and paddling one sided all the way home.   Every time you let up the wind would swing you out.   I reckon we could have made the Isle of Wight in an hour at that rate, but getting a taxi home would be expensive.

This final leg was our slowest as we were both pretty tired now and ready to flop so it was nice to see the car park, coastguard building and ultimately our landing spot.

Back in the car and round to Pagham to pick up Trevors car it was decided to have a cup of tea and breakfast at the cafe.   Fried slice, egg, sausage, beans and tomatao slipped down really well as did my tea.

What a great way to wake up a sunday morning.

REMEMBER – off shore winds shouldn’t be played with.  It gets stronger as you go out and sometimes you find yourself unable to paddle against it.   Don’t forget fluids to keep you hydrated and even a vhf radio in these sorts of conditions.   It’s your life, not mine.