Hayling Island and the surrounding Chichester Harbour can be paddled downwind in a northerly but it requires some very specific conditions and timing.

Let’s start by talking about the hazards on this run.     First and foremost you’re heading out to sea in a northerly.   Secondly you are probably going to encounter some outbound tide due to the timing required on this run.

The map shows the wind angle that this run would work well in but again, bear in mind that it is blowing you out to sea so know your capabilities and the wind strength variation over the day.   Don’t try and beat an oncoming storm or front that is gonna whip it up as you could get into trouble here very easily.

The harbour has a lot of sandbars and shallow areas that sometimes force you to maintain a more central route through the channels but this also puts you in the flow of any outgoing water so I would say the preference here is to start your run between just before before high tide so when you reach the OUT the tidal flow is still pretty mellow.   This will also give you a lot more water to keep close to the edges of the harbour if need be and give you time to make the OUT before the tide starts pulling back out.

Our map shows a couple of routes and some hazards on the way. 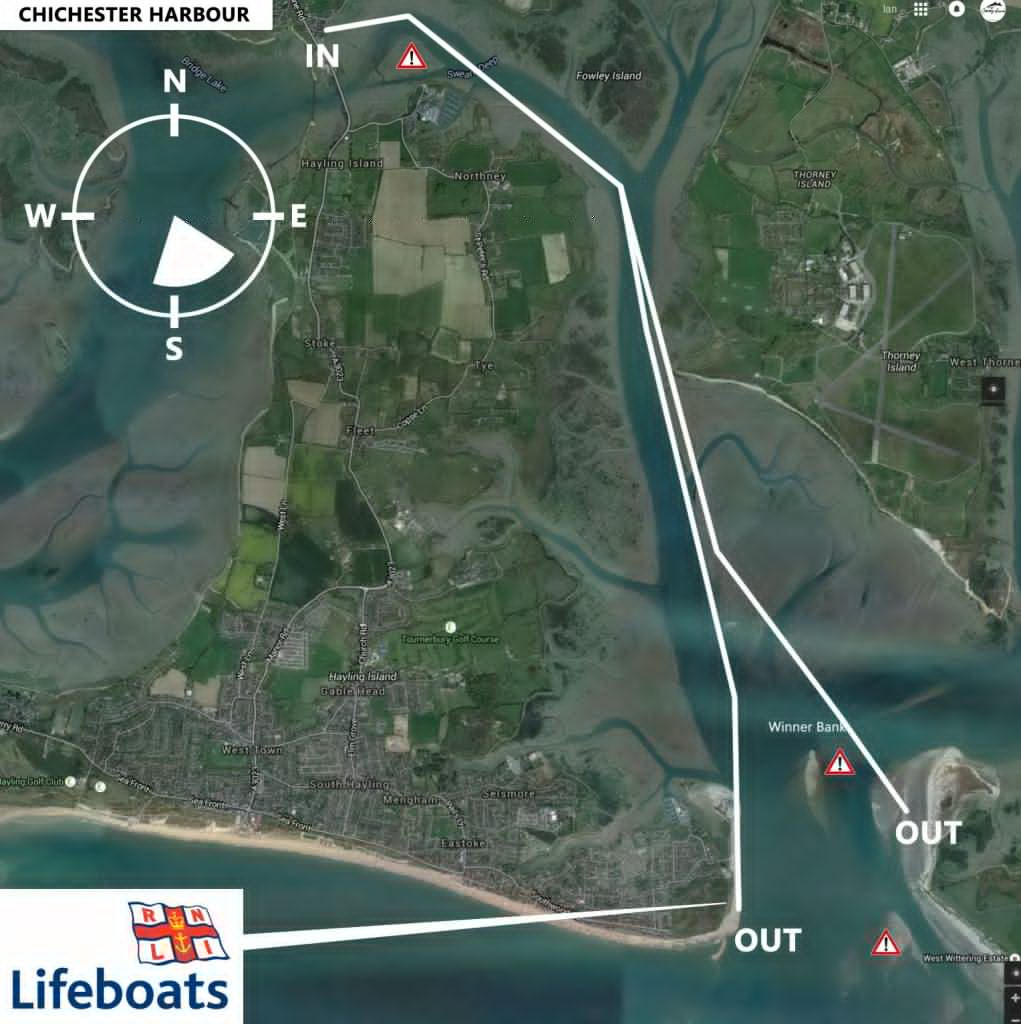 Starting at the IN point, you can park up near the bridge but do consider Spring tides as this area has been known to flood.

Depending on wind speed, but lets say it is 30 knots, this area will still be pretty flat with a small chop on it, but very quickly it lines up.

As you round the small island (marked by a hazard) you will pick up speed and plenty of bumps and it is ok to stay center of the channel here but there are moorings so stay clear of those.    On your left is a small creek and Fowley Island. This is when you gain a bit more speed and the water is chopping up more so depending on how confident you are you could paddle more to the sides or stay mid channel.

A way past Fowley Island and you are now passing alongside Thorney Island on your left.  30+ knots will see you getting so really nice glides here but this is when you need to start considering your route as a few hundred metres more and everything gets a lot more hectic.

As we left just after high on our run tide we should have plenty of water to go over the mud flats on the Thorney Island side.    This reduces the size of bumps, but you still got the wind so your getting loads of glides here. If you are heading for the OUT  at Hayling Island side then start to bear off in a more Westerly direction.

You are now in the most open section of the harbour and it all gets intense very quickly.   Waves here can be 2-3ft, but the periods are tiny so you glide on one and run into another very easily seeing your board bury and veer off course you gotta be on your game.   You really need to be paying attention to your OUT point now as it takes no time at all to reach the open water from here.

I have marked off Winner Bank as a serious hazard here.   This is a huge sandbar that is very shallow and will see waves becoming a lot more aggressive and confused so be ready to take a dip, but I would suggest going around it before it gets like that.    For a bearing you will see the big green channel markers and one of them has Winner written on it so way before then you need to be taking action to keep clear.   Talking with friends who have driven rescue boats in this area for many years, they also advised that you get some big eddies here and there is also some seriously deep water of about 60ft rising to 1-2ft in such a short distance that it causes huge water upwellings that are seriously dangerous.      This is not a fun or safe place so stay well clear of it.

Once past Winner bank you have minutes before you exit the relative safety of the harbour so you now need to be paddling side to chop to get your OUT.

If you overshoot on the West Wittering side there is one area that could save your bacon and that is the sandbar I have marked with a Hazard sign.   This does stay shallow, but by now the tide will be pulling out so you could put down here and wait a bit for the tide to drop more as it will become dry in about 30 minutes.

There will be a small channel of water left between you and West Wittering but be aware that tidal flow in this area is very fast and with a northerly wind this can be a lethal combination.

If you do encounter problems it is important to not leave it too late to call for help.   As you are exiting Chichester Harbour there is a RNLI station on the Westerly point of our map and this is right next to Hayling Island Sailing Club.       A mobile phone and 999 calling for a Coastguard, flares  will raise attention to any problems.   Hopefully this won’t be necessary as you will have assessed the conditions before launching and followed the right route so THINK before you launch on this run.

This is a super dangerous run in  strong winds so you need to be a very confident and strong paddler to do this route.

Having the right kit is important and never more so here.

Our run was done with temperatures down to 1/2 degrees of wind chill.    Make sure you have a decent wetsuit/drysuit, mittens and boots, but most importantly a hood.